2019 is coming to an end!  Very soon, a new year will begin and it certainly holds many surprises for us in the world of SEO.

To end this beautiful year, we give you the most important news uptdates from Google in 2019 right here!

The first update took place in March 2019. This was the first update that Google confirmed! The update was named Florida 2 and was considered one of the most important updates of the 2000’s.

Not only did Google announce the launch of this update just one day before it was released, but also gave it the official name “June 2019 Core Update“.

In the month of September, a new Core update came about. Like the updates that came before, Google did not give a concrete confirmation about the update, neither did they inform anyone about the changes that came about with this update.

In October, Google made an announcement about a new algorithms called BERT, one of the biggest changes to occur on the search engine since RankBrain.

The goal of this algorithm was to better understand search intentions of Internet users to enhance the results that come up on the search engine and make them more relevant.

Google confirmed that it deployed an update for its local search engine optimisation algorithm in November. This update is based on neural matching which will allow Google to better understand users’ search queries with local search intentions.

This summer, Google Images was given a makeover. From now on, when you click on an image, it will appear in a vertical, rectangular box on the right-hand side of the screen. Previously, the image would appear in a horizontal band on a black background under the selected image.

Please note that on mobile phones, AMP pages can now be accessed from Google Images. When you select an image in mobile search results, a preview of the web page header will appear at the bottom of the screen (provided it is an AMP page).

This year marked the deployment of a new display feature on the SERPs with Favicons. Initially, these Favicons only appeared in the “Headlines” carousels.

Then however, Google launched favicons in all its search results on the SERPs in the month of May.

This new display encourages users to click on one logo more than another based on their preferences and affinities and gives more visibility to content publishers.

Favicons are only visible on mobile phones, but tests are underway for desktop versions.

The new design removes groups of news articles and brings a single featured article into a map-like result (as experienced on mobile).

Since February, Google has been testing the use of augmented reality in Google Maps.

For context, augmented reality is a superimposition of image, audio and 2D/3D elements, calculated in real time.

The Californian company has permanently closed a large part of the old Search Console (the new interface was launched back in 2018). And brought about the following changes and features:

In order to improve the performance of the ads, the firm, Mountain View, has given Google Ads users the option to activate 15 second video formats, issued by YouTube, which cannot be skipped.

Previously, this option was reserved for Youtube’s favorite advertisers. But now, it will be all Google Ads, Google Display & Video 360 advertisers.

Thanks to this new ad format, it is now possible to showcase several products by sponsoring them in Google Images search results.

Google has announced the launch of Discovery Ads, available from YouTube, Gmail and the Google Discover feed. These native ads are fed from machine learning, consumption and search habits of Google users.

This year, Sergey Brin and Larry Page, the two Stanford University alumni, co-creators and founders of the Google search engine in 1998, announced their resignation.

“Today, in 2019, if the company were a person, it would be a young adult of 21 years old and it would be time to leave the roost. While it has been a tremendous privilege to be deeply involved in the day-to-day management of the company for so long, we believe it is time to assume the role of proud parents – offering advice and love, but not daily nagging!”

Mountain View was forced to pay 50 million euros by the NCIL (National Commission for Information Technology and Civil Liberties). The NCIL stated that Google did not respect the guidelines of the General Data Protection Regulations (GDPR).

“The Commission today imposed a fine of €1.49 billion on Google for illegally abusing its dominant position in the market for brokerage of online search ads. Google consolidated its dominant position in online search advertising and protected itself from competitive pressure by imposing anti-competitive contractual restrictions on third party websites.”

And of course, other features have been added this year. You can find them on our blog.

From everyone in the Myposeo team, we wish you an excellent year in 2020! 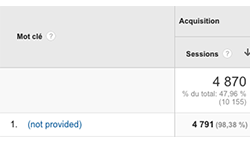 Bing had a hectic week from expanding its visual search options to introducing new Bingbots to streamline SEO, that gave...